HOLY ANTICIPATION! Could Ancient Artifact Be The "First-Ever" Portrait of Jesus?!! (Yahoo!News)

Recent & very timely developments reported by Yahoo!News during this Lenten season might prove not only to be researchers' major archaelogical discovery in the history of Christianity, but the first ever portrait of Jesus!  Move over, Dead Sea Scrolls...  Coming to light as it does now in the inertia of Lent's mid-season (someone's calling them the dog days of Lent) helps quicken the pulses w/ HOLY ANTICIPATION!  (Or is it a drumbeat we hear?) 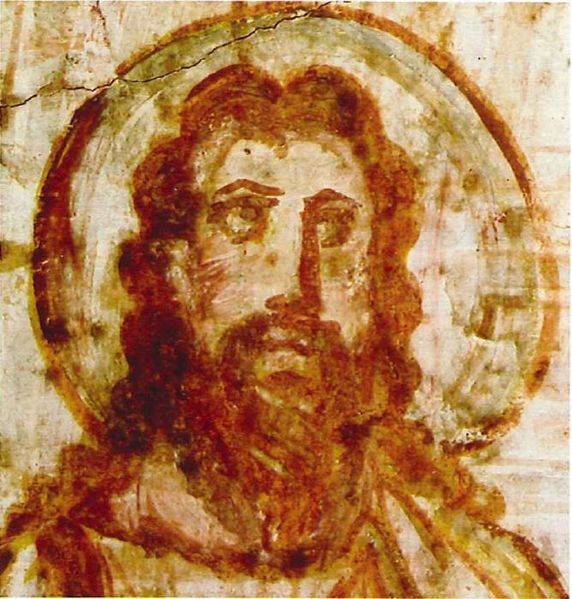 Mural painting from the catacomb of Commodilla. (Totally unrelelated to this Yahoo news report.) Bust of Christ. This is one of first bearded images of Christ, during the 4th century. Jesus was beginning to be depicted as older and bearded. (Anonymous)

Here is a Quote from Yahoo!News The Lookout News Blog...

Could lead codices prove ‘the major discovery of

British archaeologists are seeking to authenticate what could be a landmark discovery in the documentation of early Christianity: a trove of 70 lead codices that appear to date from the 1st century CE, which may include key clues to the last days of Jesus' life. As UK Daily Mail reporter Fiona Macrae writes, some researchers are suggesting this could be the most significant find in Christian archeology since the Dead Sea scrolls in 1947.

The codices turned up five years ago in a remote cave in eastern Jordan—a region where early Christian believers may have fled after the destruction of the Temple in Jerusalem in 70 CE. The codices are made up of wirebound individual pages, each roughly the size of a credit card. They contain a number of images and textual allusions to the Messiah, as well as some possible references to the crucifixion and resurrection. Some of the codices were sealed, prompting yet more breathless speculation that they could include the sealed book, shown only to the Messiah, mentioned in the Book of Revelation. One of the few sentences translated thus far from the texts, according to the BBC, reads, "I shall walk uprightly"--a phrase that also appears in Revelation. "While it could be simply a sentiment common in Judaism," BBC writer Robert Pigott notes, "it could here be designed to refer to the resurrection."

But the field of biblical archaeology is also prey to plenty of hoaxes and enterprising fraudsters, so investigators are proceeding with due empirical caution. Initial metallurgical research indicates that the codices are about 2,000 years old--based on the manner of corrosion they have undergone, which, as Macrae writes, "experts believe would be impossible to achieve artificially."