Mary's Rosary Month: How the Destruction of Christendom was Averted

Many of us may have heard of Lepanto and may even be vaguely familiar of the victory of the Christian forces there over the Turks on October 7, 1571, but the real significance of the event to the whole of Christendom--or to the world for that matter--may have become obscured over the years. So this month of October when we celebrate Rosary Month, it may be useful to revisit what exactly was at stake at Lepanto & why we are still reaping the benefits to this day.  Best of all, it might be worthwhile to consider once more the poignant role that Marian Rosary devotion played in ensuring a Christian victory in that fateful event, decisively thwarting Ottoman conquest of Europe & forever changing the course of human history.

In the Christian world, certain things emerged. For one, the Holy Rosary became firmly linked to the occasion remembered widely as the Feast of Our Lady of the Holy Rosary as the article below points out & develops fully. More importantly, the devotion became known as a victorious & efficacious recourse not just in military battles, but in our own personal battles or fortunes, whether at home, in our careers or healthwise. It should not be a big mystery therefore why the Holy Rosary is one of the most widespread devotional practices among Catholics everywhere & very often recommended by many popes over the ages! It works... Check out the full story of Lepanto:

The Name of the Feast

of Our Lady of the Most Holy Rosary

The Battle of Lepanto, 1571 by Andries van Eertvelt 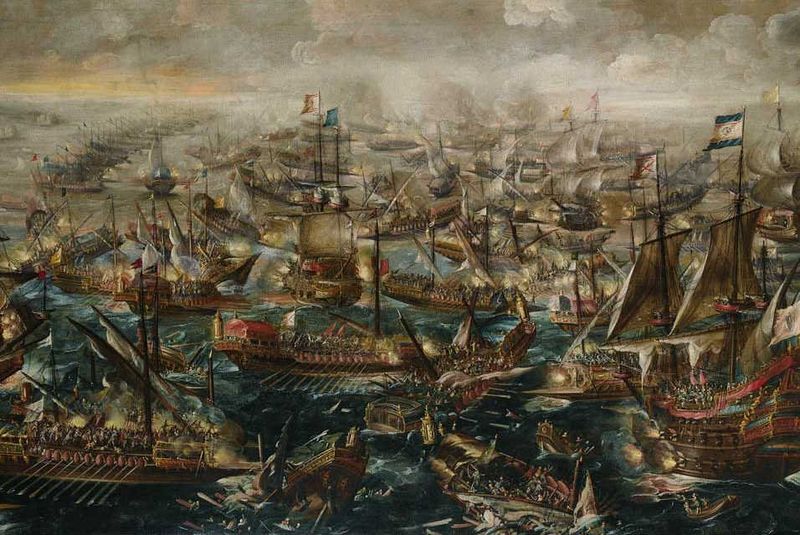 The feast was renamed by Gregory XIII when he made his great reform to the Western calendar (which we now call Gregorian). It was Pius V, the pope at the time of Lepanto, who had instituted the initial feast. But why had he decided to honor Our Lady for victory in battle in the first place?

According to Dr. Kevin Johnson in his book Rosary, Pius attributed the victory to Mary because for several years he had “exhorted all the Faithful of Europe, including those Christians held in territories already conquered by the Turks, to pray the Rosary daily to beg Mary’s intercession to save the Church and to liberate the captives.”

To counter the progress that the Turks had made into Europe (by 1547 Hungary was part of the Turkish empire), the Pope encouraged Rosary processions in Rome. These large gatherings of Christians united in Marian prayer were copied throughout Europe, and a Rosary procession took place in Rome on the day the Battle of Lepanto was won. Johnson illustrates the fervor of their prayer: “Like the early Christian martyrs, like Christ himself in Gethsemane, the laity of Europe was praying for help against those who would kill them happily, and kill them horribly, in hatred of the Faith.”

“the point of Lepanto wasn’t so much Lepanto itself

as the fact that it was through the Rosary

that the destruction of Christendom had been averted.”

With the outpouring of Marian devotion in the face of danger from the Ottomans, it made sense, then, for Pius to trace back to the intercession of Mary a great military victory against them.

But it also made sense for Gregory to alter the title. He wanted to recognize the enduring importance of a particularly powerful devotional prayer: the Rosary. As Kevin Johnson explains: “the point of Lepanto wasn’t so much Lepanto itself as the fact that it was through the Rosary that the destruction of Christendom had been averted.” That particular military crisis had been resolved (temporarily, at least), but the Church would be faced with different kind of crises (the Reformation had raised serious questions about doctrine and discipline, for example).

The Rosary, the Church recognized then and recognizes now, is special way to overcome difficulties. Those difficulties may be geopolitical (as they were at Lepanto) or they may be personal (if we’re struggling with our faith, with a temptation, or with acquiring some virtue). Whatever the magnitude of those difficulties, help can be found and victory won with the assistance of Mary through the Most Holy Rosary.

Reply thelma fermin
11:24 AM on October 22, 2010
I say the rosary several times a day when time permits or I make time. There is not a time that I asked for intercession from Mother Mary that myprayer was not answered. Thank you so much Mother Mary for all your love and intercession. I love you Mother Mary and Please stay with me and my family always. AMEN