A ONCE-IN-A-LIFETIME OPPORTUNITY THIS LENT...(OR ANYTIME?!!)

Your search has ended! If, like most serious Christians, you could use a few suggestions to give your Lenten observance more vitality  & meaning this year, The New Theological Movement offers a rare & powerful opportunity--literally once-in-a-lifetime!  Father Ryan Erlenbush' recent blog suggests this prayer method from the spirituality of St. Louis-Marie Grignion de Montfort that relies on a special act of Consecration . But get ready! If you don't start on Ash Wednesday, you won't be able to take advantage of this confluence of events till 2164 (And take heart...if you do miss this rare chance, read on anyway because Fr. Erlenbush suggests still another way to get on with the program!):

Consecrate this Lent to Jesus through Mary,

St. Louis-Marie Grignion de Montfort recommended a particular method of consecrating oneself wholly and entirely to the Most Blessed Virgin Mary and, through Mary, to Jesus our Savior. This method includes thirty-three days of preparation, followed by the act of consecration itself. St. Louis de Montfort most especially recommends that this consecration be made on the feast of the Annunciation, though other days are also acceptable. This Lent provides us with a most rare opportunity to consecrate ourselves to Mary according to de Montfort’s method. Due to highly exceptional circumstances, one could begin the preparation this year on Ash Wednesday (February 22) and complete the consecration on the feast of the Annunciation (this year, March 26). What a wonderful way to make this our best Lent ever!

The 33 days of preparation

St. Louis-Marie de Montfort recommends that we spend thirty-three days in preparing for the act of total consecration to Jesus through Mary. This includes a twelve day preliminary period in which we renounce the spirit of the world, followed by three weeks dedicated to knowledge of self, of Mary, and of Jesus (respectively). After these thirty-three days of preparation, the act of consecration is made on the following day (the thirty-fourth).There are numerous days which de Montfort recommends (and which are traditionally chosen) for the act of total consecration, including: The Assumption, the Nativity of Mary, Our Lady of Sorrows, the Presentation of Mary, and the Immaculate Conception. And there are other feasts besides. Moreover, the total consecration does not even need to be made on a specific feast day – though it is highly recommended. But, above all the others, St.Louis-Marie de Montfort most especially recommends the feast of the Annunciation as the day to make the total consecration, since this is the principal feast of the devotion. As it was on this day that our Savior took flesh and subjected himself in all humility to the Blessed Virgin, coming to us through her; so on this day it is most fitting that we subject ourselves by a holy slavery to Mary and return to our Lord through her by whom he came to us.Here is a table including some of the feasts on which one could make the total consecration, including also the day on which the preparation would start. 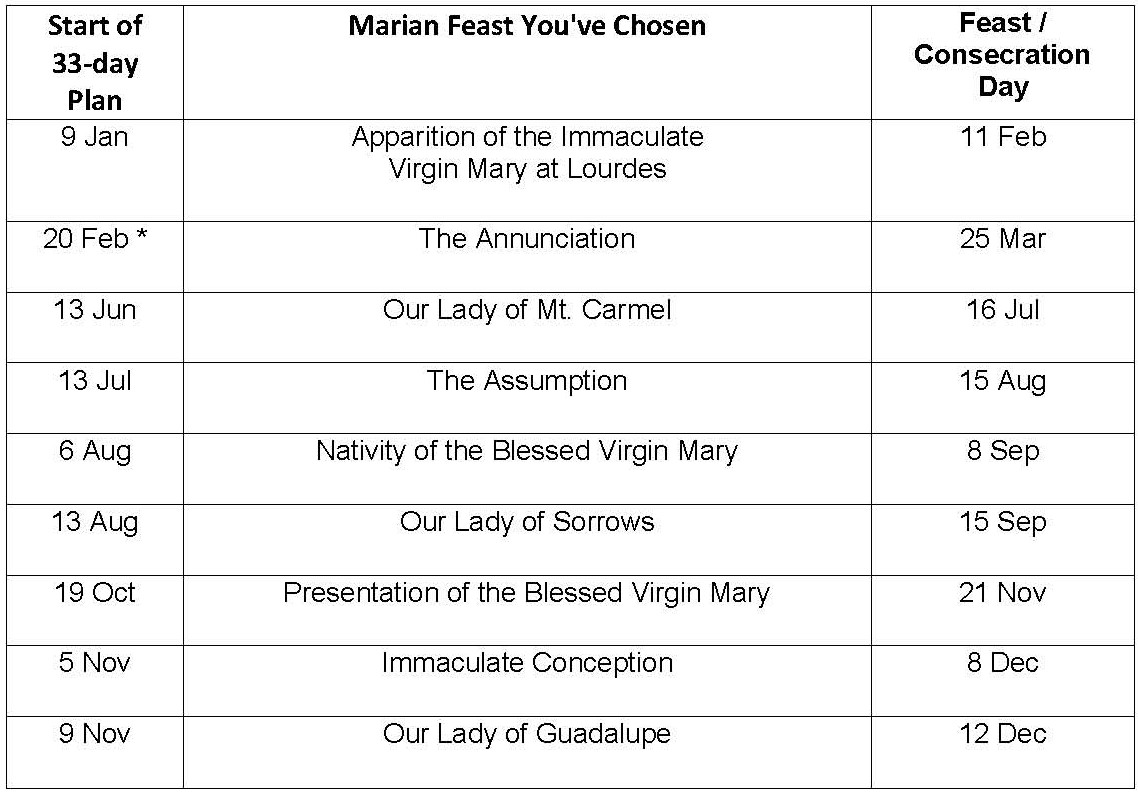 * N.B. When there is a leap year, the preparation for total consecration on the feast of the Annunciation begins on February 21st.

Why this Lent is special

Three circumstances have come together this year to provide the opportunity to begin the preparation for the total consecration on February 22nd (Ash Wednesday) and conclude on March 26th (Feast of the Annunciation). This is highly unusual.

1) Ordinarily, the Annunciationis celebrated on March 25th. However, on account of the Fifth Sunday of Lent (March 25th, 2012), the feast has been moved this year toMarch 26th.

2) Generally, in order to completethe thirty-three day preparation for the feast of the Annunciation, one wouldbegin on February 20th. However, because this year is a leap year,we gain an extra day of preparation and can start later than usual.

3) This year, Easter falls onApril 8th, which would usually make Ash Wednesday fall on February 21st. However, because this is a leap year, Ash Wednesday is February 22nd.

All three of these factors combine to allow the thirty-three day preparation to begin on February 22nd which is also Ash Wednesday, and to conclude on March 25th which is the Fifth Sunday of Lent. Then, as de Montfort asks, the consecration is made on the following day, March 26th which, this year, is the feast of the Annunciation.

This hardly ever happens

St. Louis-Marie died on April 28th, 1716. Since that time, there has only been three years in which the preparation for the total consecration could begin on Ash Wednesday and conclude with the act of consecration on the feast of the Annunciation (being moved to March 26th): 1792, 1860, and 1928.The next occurrence of such circumstances will not be until 2164 – and then, not again until after 2200. This is very clearly a once-in-a-lifetime opportunity to make this Lent special.

A plan for this Lent

February 22nd, Ash Wednesday: Begin the preparation for total consecration with the twelve preliminary days, renouncing the spirit of the world. This period concludes on Sunday, March 4th, the Second Sunday of Lent.

March 5th, Monday of the Second Week of Lent: Begin the first week of the preparation, knowledge ofself. This concludes on Sunday, March 11th, the Third Sunday of Lent.

March 12th, Monday of the Third Week of Lent: Begin the second week of preparation, knowledge of Mary. This period concludes on Sunday, March 18th, the Forth Sunday of Lent also called Laetare.

March 19th, Monday,Solemnity of St. Joseph, Spouse of the Virgin Mary: Begin the third and finalweek of preparation, knowledge of Jesus. This concludes on Sunday, March 25th ,the Fifth Sunday of Lent.

March 26th, Monday,Solemnity of the Annunciation of the Lord: Make the act of total consecration to Jesus through Mary.

1) Fisheaters.com has a good introduction to the total consecration together with the daily readings and prayers which are commonly used in the preparation. I would highly recommend making use of this resource. See the website [here].

2) St. Louis’ primary theological work on the total consecration, “True Devotion to Mary” can be read on-line through the EWTN website. While the format is simple and somewhat “plain-Jane”, I think it makes the text much easier to read than what I have seen on other sites. See this website [here].

3) I believe that another work by de Montfort, “The Secret of Mary”, would be even more helpful to most than the “True Devotion”. “The Secret of Mary” is much shorter (only about sixty pages, compared to nearly six hundred), and is also far more direct and pastoral. This work really is a must-read for any who are planning on making the total consecration. EWTN has put the whole work on-line. You can read it [here].

Finally, it would be well worth the money to purchase hard-copies of all these works. You can find them through your local Catholic book store, or on-line through TAN books and other sellers.

You can spread the word about the Total Consecration through Facebook.

Having read your enthusiastic praise of the works of St. Louis-Marie de Montfort, I thought you might be interested to know that his favorite Marian book has been translated into English.
http://blessedmarymotherofgod.com/holyslavery.html

Having read your enthusiastic praise of the works of St. Louis-Marie de Montfort, I thought you might be interested to know that his favorite Marian book has been translated into English.
http://blessedmarymotherofgod.com/holyslavery.html

Very delighted and grateful for a very thoughtful comment coming from someone clearly well-informed and well-versed on the subject, with an even more obvious devotion to both St. Louis-Marie de Montfort and Mary. A really great blessing and tip (and link!) for me and all our site members, friends and visitors...

Happy Feast of Christ the King!